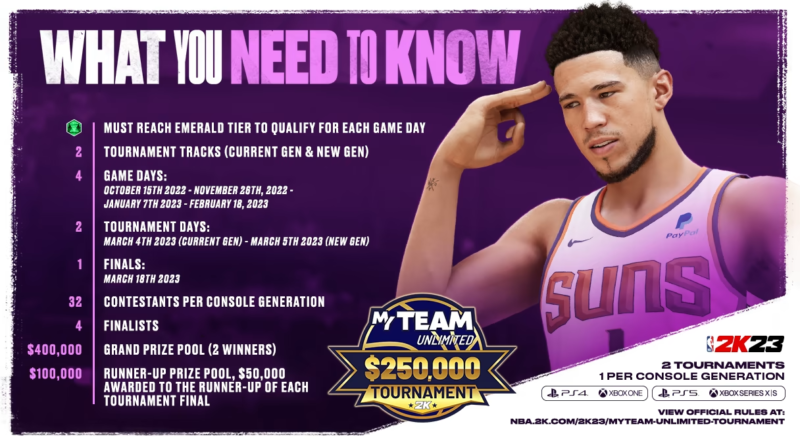 You must achieve the emerald tier in unlimited during a season leading up to the Gamedays in order to be eligible for the MyTEAM unlimited tournament. You may enter 4 qualifying Gamedays for the event, which takes place in-game on the MyTEAM menu page. Furthermore, you should keep in mind that your tier level in limitless resets at the beginning of each season, therefore you will need to do so in the next season in order to qualify for the following qualifying day.

For Track 1 Tournament (Current Gen) Currently planned to occur online on or around March 18, 2023, and on March 18, 2023, for Track 2 Tournament (Next Gen) are the Championship Finals (with dates subject to change by Sponsor in its sole discretion). Even on a day when a game is planned, the schedules for all tournaments and championship finals are subject to change. Each participant is responsible for regularly visiting the contest website.

The commentary for the tournament round and each Gameday qualification will be aired live from blue coast studios in Los Angeles online. Two players from each console generation will compete against one another in a live final at the grand finale. To remain up to speed with all the newest info and streaming links, be sure to follow the official Twitter! With any NBA 2K23 MT coins needs, you can find recourse through reliable shops.

Entrants must fulfill the eligibility conditions outlined in section 1 above in order to participate in the contest. The winner of this competition will be chosen based only on talent; chance will not be involved. To enter the contest, participants must own or have access to NBA® 2k23 (the “game”) on a PlayStation 4 (track 1), PlayStation 5 (track 2), Xbox One (track 1), or Xbox x/s (track 2); (ii) have an internet connection (broadband internet access is not necessary, but it is recommended); and (iii) own or have access to any of the following:

Legal residents of the following who are at least 18 years old and the age of majority are eligible can participate in the $250,000 NBA 2K23 MyTEAM Unlimited $250,000 Tournament:

While this offer is not valid in Arizona, Connecticut, Maryland, North Dakota, or Quebec and where prohibited.

The competition will include two distinct tracks for PlayStation (PS) and Xbox participants. An NBA 2k23 game (“game”), a Gamertag and Xbox Gold subscription or a PSN ID and PS Plus service, as well as an internet connection, are required to participate. For track 1 and track 2, the game must be played on PS4 and Xbox One, and on PS5 and Xbox x/s, respectively. There are three parts to this competition: the pre-qualifying phase, the Gamedays, and the tournament. Wish you good luck and bring wealth home. 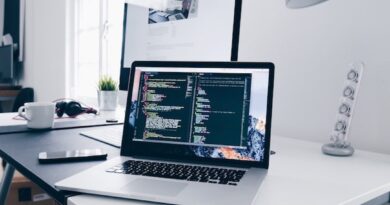 What is Moonlighting and how it is impacting companies?

How To Make Your Hair Long On Bitmoji